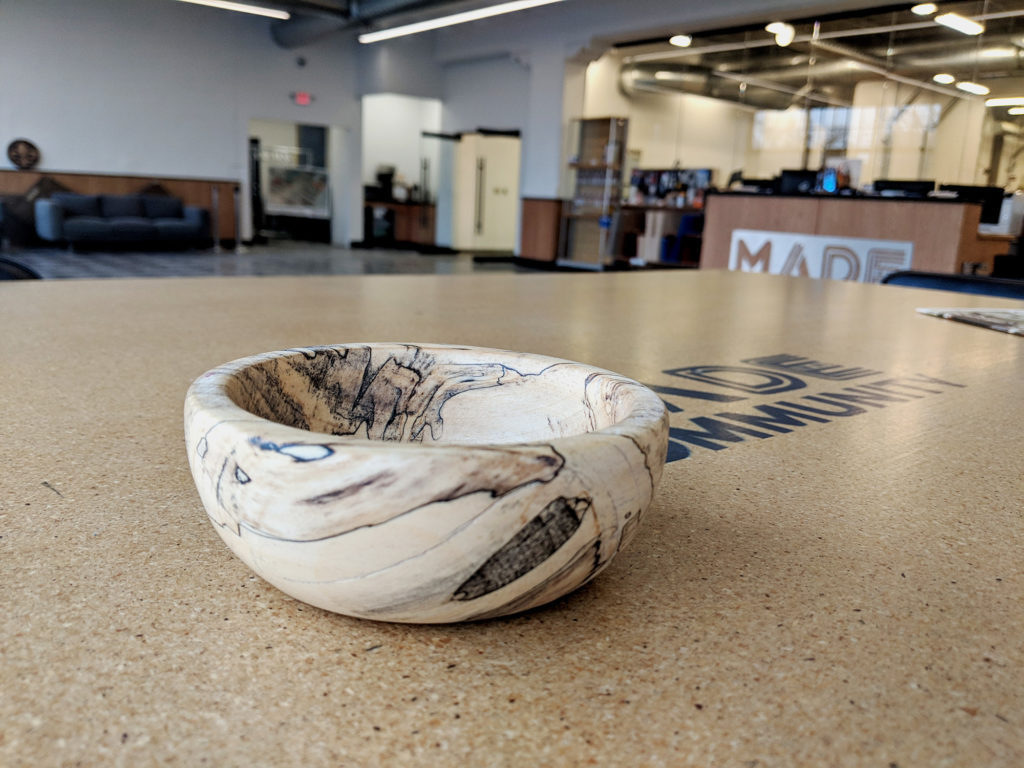 Jim is a St. Louisan through-and-through. He’s lived and worked here his whole life, and now that he’s retired from a long career as a professional photographer, he’s devoting time to learning a plethora of new skills at MADE. Jim’s most often to be found in the woodshop, specifically at the wood lathe, working diligently on a new turned bowl, candle stick, or pepper mill.

Jim doesn’t come from a family of makers—his grandfather dabbled in woodworking after he retired, but beyond that, the Van Horns don’t have a particular legacy as craftsmen. When Jim casts back for the first time he can remembering making something by hand, he recalls building a replacement ignition for his car in the early 1970s. His interest in making things has always come from a desire to create something useful. Referring to friend and fellow artist, Jim says “His approach is form over function and mine always had been function over form. We don’t argue, but we try to help each other see how you can combine the two.”

This tension between aesthetic and function is visible in the progression of Jim’s work at MADE. “Sometimes a simple shape is the best,” he says of his turned bowls. In his early work in the woodshop, he attempted to “get fancy,” but he just doesn’t like those pieces as much anymore. He’s moved decisively towards smooth and simple contours the more he practices. The forms Jim creates have minimal, graceful silhouettes, designed to highlight the beauty of the material, the undulating patterns of the woodgrain.

When asked to describe his personal style, Jim’s first reaction is to say “haphazard” and “unfocused,” though he ultimately he lands on a softer description: “still evolving.” Jim seems genuinely enthusiastic to self-identify as a beginner in most of the shop spaces at MADE. What’s his preferred machine? He doesn’t play favorites—Jim might spend the most time on the wood lathe these days, but he has a keen sense that for any given task, there’s a right tool for the job, and Jim would like to learn them all; his focus is on continual improvement.

Jim’s next project is constructing a Fire Aero kit car. Only twelve of this second generation model were ever made before the manufacturer went belly-up. It’s clear the air of exclusivity around this project is highly appealing to Jim—he’s been retired for three years now, and in his own words “loving it,” because it allows him to dig into unique (and nerdy) projects like making this three-wheeled kit car.

With the resolve of a lifelong pragmatist, Jim leaves us on this note: there’s nothing quite as satisfying as taking a big hunk of raw material and turning it into something useful.

Sign up for our wood lathe class to learn how to turn your own bowls.

Come check out the space